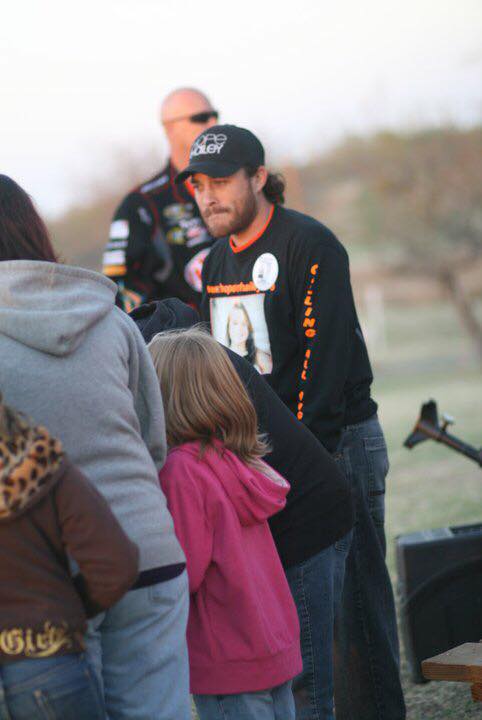 (VNO) — Yesterday, Clint Dunn got ready to do his daily, ‘Facebook Live’ video, only to discover he had been locked out of the software.

“Billie Jean and Shawn are running scared now”, Dunn said. “Someone reported me to Facebook a lot, and they think that’s going to shut me up. It’s not. It’s only going to make me work harder and smarter”.

Four days ago, Dunn, whose 13-year-old daughter was kidnapped and murdered in December 2010, took to social media demanding justice. “If they think I’m going away, they’re wrong. I will die doing this if I have to – and if anything happens to me, there’s an army remaining who won’t give up. The case is busted wide open now, and you can’t stop it”.

“I am Hailey’s voice”, Dunn said. “I am Hailey’s only voice. Her Mama failed her by choosing her murdering boyfriend over our daughter”.

The prime suspect in the murder of Hailey Darlene Dunn is her mother’s former live-in-boyfriend, Shawn Casey Adkins. While Clint Dunn was out searching for his missing daughter, Hailey’s mother and then-boyfriend refused to search.

“If you think I enjoy running into that monster – with my 8-year-old – in public, you’re wrong. He taunts me. He laughs. He thinks he’s going to get away with it”.

“I promise you he’s not. And neither will she”.

“She had her chance”, Dunn continued. “But I spent all day yesterday reviewing every single lie Billie Jean told the media – and learning new information. You’re going down, both of you”.

Yesterday, Dunn received a photo of a balloon his former wife signed at a February 2011 vigil. On the balloon, Billie Jean Dunn wrote the following: “I know ur (sic) not here in Dunn, I just want to add to it. You have to be @ home. We miss you so much, baby”.

“You mean to tell me we were searching in Dunn, and she already knew Hailey wouldn’t be found there”, Dunn said. “Of course she wasn’t in Dunn – Shawn said so during the polygraph. He said she would be found in Scurry County, and that’s exactly where she was found. His phone pinged off the tower where she was located the day before she was reported missing. Now, ask me who’s property she was found near, because the police said it was Shawn’s grandpa’s place”.

“That woman is up to her eyeballs in this mess”, Dunn continued. “And I’m sorry it took me this long to realize it. Grief does a lot to a person’s mind. It makes you crazy. She was slipping up left and right, and I caught it too late. But the experts, they didn’t miss a thing. That’s why the police, statement analysis experts, journalists, searchers, and others were telling me to stay away from her. They all knew back then what I didn’t”.

“You can’t hurt a hurt man”, Dunn said. “I have thousands of people on my side, always have. Now, I understand this is war, and I’m going to fight this like a soldier on the front lines. I’m not taking breaks or going anywhere. Soldiers don’t take cigarette breaks. They don’t stop because stopping could get them killed. I’m going to live this 24/7 until they’re both behind bars”.

Since Facebook has limited Dunn’s communication, he will be logging in from different accounts and adding other social media platforms. “I’m starting a YouTube channel”, Dunn said. “You’re going to see that I live and breathe Hailey’s case 24/7. If I have to invite the world into my home to get justice for Hailey, I’ll do it”.

Dunn’s videos have been viewed more than 25,000 times on social media in the last four days; as expected, he is receiving backlash from those who prefer to believe wild conspiracy theories as opposed to statistics.

“Statistics show Shawn Adkins did this”, Dunn said. “The mother’s boyfriend is usually the guilty one. Stranger danger accounts for less than one percent of all crimes, but we spend too much time teaching our kids to fear the boogeyman instead of Mom’s sicko boyfriend. Yesterday, I learned Hailey slept with a baseball bat in the days leading up to her murder, because she was terrified of Shawn. My Mom (before she died) told me Shawn would stand outside Hailey’s door at night, and she could see his feet. I wish I had known all of this back then, but Hailey knew I would have killed him myself and I know she was protecting me. This killed my mother. It killed my father. It killed my best friend, Pete. It’s killing me, but not before I see them both get the needle”.

But others prefer Dunn chase down dangerous criminals not associated with the case. “Yesterday, they tried to say the Aryan Brotherhood did it, before it was a biker gang. Dirty police officers in Odessa, drug dealers. They (the conspiracy theorists) want me focused anywhere but on Shawn and Billie Jean. Their phones didn’t ping where Hailey was, Shawn’s did. They didn’t quit their jobs the day she disappeared, Shawn did. They didn’t write that message on the balloon. Billie Jean did”.

Dunn is asking for help from the public setting up other social media platforms for Hailey’s case, such as Instagram, Reddit, Snapchat, and more. “Hailey’s friends are reaching out to me. They are adults now, and (they) know social media much better than I do. I need their help. Push the #JusticeForHailey2019 hashtag and make this thing go worldwide. Everyone who says they’ll help me, I tell the the same thing: make this story go viral”.

There is a $15,000 reward for information leading directly to the arrest of Hailey Dunn’s killer(s). Anyone with information is asked to call Investigator John McDaniel of the Scurry County, TX, District Attorney’s Office at 325-573-2462, or you may submit a tip online to the Texas Rangers Cold Case Hotline. #JusticeForHailey2019.