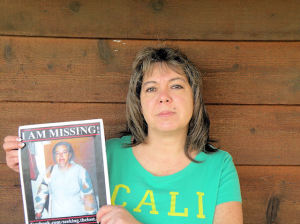 Daughter of missing woman leads effort to clothe, feed the homeless this winter

(VNO) — Most of us see the gradual cooling across the country as a blessing after a blistering summer.  While many are looking forward to cool nights at football games or around a bonfire, there are others who wonder if they will be able to stay warm enough during the upcoming cooler nights.

That’s why one woman, who has a unique connnection to the homeless population, is teaming up with a local non-profit in the St. Louis, Missouri, area, to clothe and feed the homeless and less fortunate.

While many cities have seasonal collection drives around the Holidays for coats and other necessities for the homeless, the need is beginning to rise for those who have no place to go to stay out of the elements permanently.

Enter Robin Wells-Burton. Robin is the daughter of missing Cloudia Leslie Wells, and the Founder Missing & Homeless. Robin discussed the urgent need for warm items in a recent interview with Victims News Online.

Robin learned first-hand how the homeless population struggles to keep warm during colder months, even in a state like California. In a quest to find her own mother — missing since 1998, and presumed to be living amongst the homeless population — Robin came face-to face with people in last winter, who have far too little clothing and food during the winter months.

Enter ‘Missing and Homeless’, created by Robin, for people just like her mother.

In the few weeks since the drive began, Robin has already received an outpouring of support and items, partly due to the timing of the drive:  whereas most drives come later in the season, having this one earlier is catching the people who are just now buying winter clothing, and who have not forgotten the clothing they replaced with back to school shopping.

While coats and the like are always needed, I am often asked about items like hoodies, sweat shirts an the like.” Robin told VNO.  “Anything can be used, as long as it is in good repair, without holes and thin areas. Anything that can be layered up can help protect against the colder weather.

Blue jeans (without holes) are always a sought-after item.

Men’s clothing is in desperate need right now,” Robin said.  We are getting a lot of women’s and children clothing, but hardly any for the men.”

There is a higher number of homeless men on the streets than women and children, and these donations could make a world of difference for these men in need.

Due to the already-overwhelming response, Robin finds herself with yet another challenge:  a storage building that could be donated by anyone in the Collinsville, Illinois area . They are receiving donations at such a high rate they are having a hard time finding a place to store everything.

Robin also disccused relaunching a third program she participated earlier this year, called ‘Blessing Bags’.  While people often think of food or clothing as needed items, often overlooked are the simplest things that we all use day to day.  The group assembled around 150 bags, containing an assortment of toiletry and personal items, such as:

The bags were quickly claimed, and many who received them were grateful to have the smallest of daily necessities.  Items such as notebooks, pens, envelopes or stamps can be a huge help as well.

Given the often transient nature that the homeless live by, one often cherished item is a good backpack or purse. We all have a closet with several bags from school years or trips gone by laying in the floor.  We might never even lift this bag again except for the day we throw it out; yet, someone else might need that to literally transport his or her world.  A secure bag in good repair can make all the difference when one has to hold every possession close by.

If you are in the St Louis area and would like to get involved, please contact Robin Wells-Burton at 618-550-1005.

If you are not in this area, Robin and her colleagues encourage our readers to seek out local groups or look into forming a drive in your area.